The Eisenhower Matrix: how to prioritize your tasks

Dwight D. Eisenhower was a very successful person. He was a five-star general in World War II and the 34th President of the United States.

How could Eisenhower do so many things? His secret was to know the difference between urgent and important.

In a 1954 speech, Eisenhower quoted an unnamed university president who said,

We give more attention to the urgent things than to those which are important. That is called the mere-urgency effect.

The "Mere-Urgency Effect" is a psychological quirk that explains why we're so bad at task and time management. It states that our attention is drawn to time-sensitive tasks over tasks that are less urgent even when the less urgent task offers greater rewards.

A recent study in the Journal of Consumer Research showed that the effect is real. But it also showed something else: We can overcome the mere urgency effect if we reflect and consider how important things are.

And to do that, no tool works better than the Eisenhower matrix.

What is the Eisenhower matrix?

The Eisenhower matrix is a productivity tool that helped people focus on the tasks that have the highest impact. It’s a time management method that seeks to answer one simple question:

What is the most important thing I should do right now?

This is usually answered by assessing four quadrants that are labeled: 1) urgent and important, 2) not urgent but important, 3) urgent but not important, and 4) neither urgent nor important. 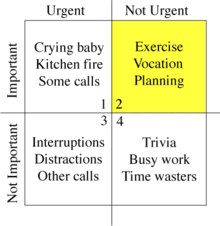 The quadrants of the Eisenhower matrix

First quadrant. Urgent and important tasks. Image: The house is on fire.

This is the alarm zone. Sometimes things arrive here because you procrastinated, but some other things just pop up here out of nowhere.

Examples of this are:

You can prevent to stay in this zone for a long time, but it won´t be possible to prevent it at all. There are just some urgencies that you will have to attend. The problem with this zone is that it creates a lot of stress.

This is the best place to be. Here you don´t focus on problems, but on growth. The more time you pass in this quadrant the more you will grow and the less tasks you will have in the first quadrant. This is the place where effective people make the difference.

Image: You´ve got a message.

This quadrants represent things with a time constraint that correspond to someone else priorities or at least are not things promoting your well being or improvement. Distractions that need immediate attention fall into this category. If you stay too long in this quadrant you will feel that you are not in control of your life and you will probably live in procrastination mode..

Many of this tasks can be done by other people in your behalf, so delegating can be a good option. Or being automatize. Sometimes you can just reorganize your workflow for this tasks so you can do a lot of them at the same time. For instance you can use a program to have all your non essential emails sent to you at a particular time of the week, and read them together instead of being bothered every day.

Fourth quadrant . Not important, not Urgent.

Supress or use as a gift to yourself.

If you are in this quadrant too often you will probably feel that your life is empty. It is a very passive quadrant and tasks here do nothing to improve your life. That does not mean that you should never stay in this quadrant. You need to rest and disconnect but it is better if you do it with purpose.

The difference between urgent and important tasks

The Eisenhower Matrix is based on the concept of urgency and important. Urgent tasks are things that need to be done right now because they are time sensitive. Important tasks are those that will support you attain your long-term missions, goals and values.

How to use the Eisenhower matrix

The categories are fairly straightforward, but many people have trouble using this tool because they choose not to prioritize their tasks.

The solution is to create a comprehensive list of tasks that are categorized by urgency and importance. You should then systematically work through your list and decide which items belong where.

The Eisenhower matrix can be used with an affinity diagram, which will bring the tasks into a visual format. This is helpful because you can more clearly see which tasks are clustered in the same quadrant and understand what needs to be done next.

Many people like to use a diagram to create a new list of tasks and prioritize them by importance. After that, they can re-sort the items based on urgency.

The matrix can be very useful in a group setting. It can act as a collaborative brainstorming tool, or people can use it to prioritize items on a project and ensure they are completed before moving forward.

No, he did not. It was thirty years later that Stephen Covey using Eisenhower's insights who created the Eisenhower matrix, that has later become known too as The Time Management Matrix, The Eisenhower Box, The Eisenhower Method, and The Urgent-Important Matrix.

Should you use the Eisenhower matrix?

The Eisenhower Matrix is best suited for managers and supervisors who need to prioritize tasks and resources. It can also be used by individuals who are trying to figure out how much time they should spend on different tasks.

This is an effective tool, but it requires discipline to remember which quadrants are urgent and which are important. It’s also important to put things in the correct quadrant so you focus on the tasks that really need your attention.

This is a good tool to use if you have many (more than 25) tasks to complete each day, but it’s not ideal for someone with only a few tasks. If that’s the case, it might be better to simply keep the task list in your head.

What are the Benefits of using the Eisenhower Matrix?

Tips for working with the Eisenhower Matrix

Make sure you are clear about what the task is, the need for it, who has to do it and when.

Check the deadlines of the tasks.

Then plan your work according to priorities and Eisenhower matrix. Eliminate the tasks that are not urgent nor important (fourth quadrant) try to isolate yourself from tasks in the third quadrant. Then address the tasks in the first quadrant and try to leave time to work on the tasks in the second quadrant. You can color code the tasks or just make a mark close to them.

Mental models having to do with the Eisenhower matrix

A mental model that is related to the Eisenhower matrix is the eat your frog first mental model. This mental model states that you should tackle early in the morning, when you have the most energy, the heavier task of the day.

This model does not consider importance or urgency but how hard is a task for us.

Both models can work together without any problem.

Fight the shark closest to the boat first

If you are attacked by a handful of sharks, you better choose to fight the one who is closer to you first. Otherwise you won´t probably survive to fight the next one. This model considers urgency and it is fully compatible with the Eisenhower matrix and the shark would be the first quadrant tasks. No one can doubt that first quadrant task have to be at the top of prioritization.

The Eisenhower Matrix is a great tool for managing your time.With the eisenhower matrix, decision-making and prioritizing are much easier.

Note: You can read this post in spanish in our spanish blog Entusiasmado.com (La matriz de Eisenhower)